"Bodinrocker proves that old-school isn’t dead – or even just resting...

Recommended for any fan of classic rock" (Hardrock Haven) 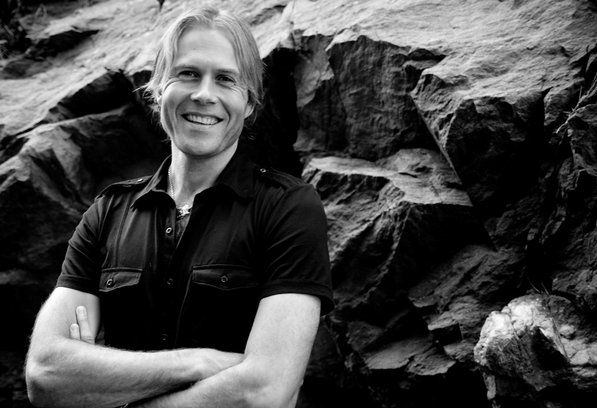 About: Bodinrocker is Anders Bodin from Gothenburg, Sweden.

Bodin´s interest in music started when growing up in the small village Hallen in Jämtland in the middle of Sweden. He started playing the guitar and writing songs at the age of 10. His songwriting has been influenced by Status Quo, Beatles, Slade and Neil Young and many more.

Inspired by Status Quo's supposedly farewell gig at the ice stadium in Stockholm in 1984, Anders, along with his first band Blackboard, managed to get the entire school auditorium to sing along to Bye Bye Johnny. After those experiences this 12 year old boy knew what he wanted to do. During his teenage years in Uppsala he played more school auditoriums with the band 12 Bar Boogie. After moving to Gothenburg in the 90s Anders focused more on his education and on his job. But in the early 2000s the time was right for Anders to take on his music seriously again.

In 2006 his debut album Hall Of Flames was released under the name Anders Bodin. The album was co-produced by Lars Ekberg, his brother in law, and was released by his own company Bearman Music. It ended up being a very guitar oriented album in the classic rock style and got some great attention. The title track was used by TV4, in Sweden, as background music when the swedish astronaut Christer Fuglesang was about to do his first space trip.

In june 2008 Anders Bodin was back in the studio for his next album. He once again worked with the same musicians as from the first album. Marcus Sigvardsson on bass and Klas Anderhell on drums, who also have worked with well known swedish artists such as Jerusalem, Mikael Rickfors, Mats Ronander, Jerry Williams, Carola and many others. Lars Ekberg was once again back as the co-producer and the recordings took place at Oakmountain studio in Gothenburg.

The first single Scooter was released as a digital single in early 2010 and got some great airplay in Sweden.

of course being the opening act to the legendary Status Quo in Stenungsund, Sweden, in july.

In late 2010 and early 2011 Anders Bodin was filmed by Titan Television during 4 weeks at his work in the ambulance service in Gothenburg. This was a part of the reality series

February 2011 saw the release of another single from the mysterious man album, a re-mastered radio edit of the catchy Back on Track.

Rock It The Right Way is the title of Bodinrocker´s third album, released in May 2014. Once again co-produced by Anders Bodin and Lars Ekberg. For this album singer-guitarist Anders Bodin recruited Klas Anderhell on drums and Stefan Deland on bass, who are also the current rhythm section of Swedish band Sven-Ingvars.

Like on the first two albums the music is in the classic rock domain with songs ranging from heavier rock tracks to lighter pop-rock tunes with clear melodies.

For the new album Bodin has worked with new songwriting partners. Anders has written the music. The lyrics were written in collaboration with his friend and singer/songwriter Mårten Lärka and with Jan Leentjes from Holland.

Long Way Round and Space were released as singles. The Race is a song about the Gothenburg half-marathon. In one of these races Anders ended up on a stretcher because of the extreme heat.

Spetember 14 2018 release of the "Eye To Eye" album. It´s a diverse and dynamic album in the classic rock domain. Productionwise and musically this is probably the best Bodinrocker album until now. The performing musicians are Anders Bodin (guitars and vocals), Lars Ekberg (piano, organ) and the rhythm duo from "Sven- Ingvars", Klas Anderhell (drums) and Stefan Deland (bass).

Sounds like: Put Quo, the bluesy years of Whitesnake, Beatles and some folktones in a mixer and press the button. Then you have it!!

Interview with Anders Bodin in  issue (72) of Fireworks Magazine.